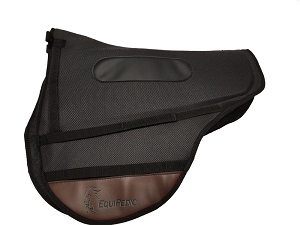 Horseman heads to Texas for peace

By NICOLE STRICKER
Sentinel correspondent
www.santacruzsentinel.com
Perhaps hoping to appeal to the president horseman to horseman, Lawrence "Doc" Mishler is riding to Crawford, Texas, on behalf of starving children and world peace.
Mishler, who says he’s a former bail bondsman and philosophy professor, gave away his possessions and set out from Montana on horseback in June. He has been riding through Santa Cruz County for about a week.
At noon Monday, he was packing up his horses — 4-year-old Faith and 5-year-old Chief Spirit — and heading for the highway. He was planning to ride along San Andreas Road and then point his steeds south.
"I had mapped it all out, but then I talk to people along the way and they always know a better way," Mishler said. "Now I’ve put the maps away and just listen to the people."
He said his journey was inspired by the writings of Wayne Muller, founder of Bread for the Journey, an organization that nurtures neighborhood philanthropy. After reaching Muller’s home in Mill Valley on Thanksgiving, Mishler decided to embark for Crawford, President Bush’s hometown, to urge the commander in chief to focus on childhood hunger instead of war.
"If you can spend $100 billion destroying people, you can spend $50 million to feed people," Mishler said. "It is the land of plenty."
Asked when he expects to reach Texas, he said, "That depends on the horses." He averages 10 miles a day, and said it’s taken him since Christmas Day to get here from Marin County.
For most of the journey, people along the way have fed and housed Mishler, his dog and his horses. For the past few days, Mishler has bunked at the Moon Valley Training Center.
He credits his furry companions for generating such generosity.
"People like horses and dogs," he said, winking.
But Mishler also credits God for the success of their trip, saying prayer has gotten them out of several jams. Mishler says he was diagnosed with cancer in 1995 but refused surgery and began reading the Bible. He relied on prayer, herbs and alternative medicine and is now cancer-free, he said.
Mishler said he never knows how far he’ll get or where he’ll spend the night.
"Each day I just say, ‘Come what may.’"
Donations and pledges can be sent to Bread for the Journey at 267 Miller Ave., Mill Valley, CA 94941.
Information on Mishler’s ride is also posted online at www.breadforthejourney.org and www.equipedic.com.
<< Previous Page
Quick View